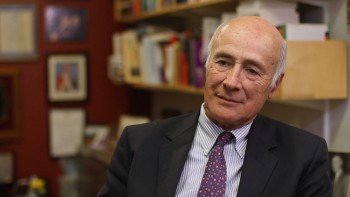 He is the co-founder, along with Robert Keohane, of the international relations theory of neoliberalism, developed in their 1977 book Power and Interdependence. He developed the concepts of asymmetrical and complex interdependence. More recently, he pioneered the theory of soft power. His notion of “smart power” became popular with the use of this phrase by members of the Clinton Administration, and more recently the Obama Administration.

Professor Nye has served as Assistant Secretary of Defense for International Security Affairs, Chair of the National Intelligence Council, and Deputy Under Secretary of State for Security Assistance, Science and Technology. In a recent survey of international relations scholars, he was ranked as the most influential scholar on American foreign policy, and in 2011, Foreign Policy named him one of the top 100 Global Thinkers. The Magazine’s valued reporter Daniel Drezner wrote: “All roads to understanding American foreign policy run through Joe Nye.” In September 2014, Foreign Policy reported that the international relations scholars and policymakers both ranked Nye as one of the most influential scholars. In October 2014, Secretary of State John Kerry appointed Nye to the Foreign Affairs Policy Board. He is also a member of the Defense Policy Board.