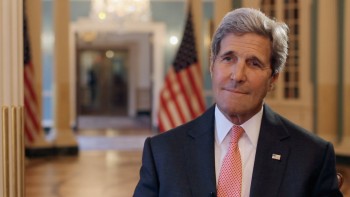 Quote: “There are dangers in certain places. There’s a lot of travel, long hours, not high pay.  And it’s done because people love the concept of serving their country, and they love the idea of taking American ideals abroad.”

John Kerry was sworn in as the 68th Secretary of State of the United States on February 1, 2013. Secretary Kerry joined the State Department after 28 years in the United States Senate, the last four as Chairman of the Senate Foreign Relations Committee. In 2009, Secretary Kerry became Chairman of the Senate Foreign Relations Committee, assuming a leadership role on key foreign policy and national security issues facing the United States, including Afghanistan and Pakistan, nuclear nonproliferation, and global climate change. His service as Chairman built on his previous Senate work that included helping to expose the Iran-Contra scandal and leadership on global AIDS. In 2010, as Chairman of the Foreign Relations Committee, Secretary Kerry was instrumental in the ratification of the New START (Strategic Arms Reduction Treaty) Treaty, a vital nuclear arms reduction agreement with Russia that helps steer both countries away from dangerous nuclear confrontations.

In his 28 years on the Senate Foreign Relations Committee, Secretary Kerry chaired the Asia and Middle East subcommittees where he authored and passed major legislation on international drug trafficking, international money laundering, humanitarian aid, and climate change, and he helped negotiate the UN’s genocide tribunal to prosecute war crimes in Cambodia. He also held senior positions on the Finance, Commerce, and Small Business committees, as well as served as a member of the bipartisan Joint Committee on Deficit Reduction, where he worked across party lines to try and reduce the country’s debt and strengthen our economy. Prior to his departure from the Senate, Secretary Kerry was the seventh-most senior Senator. Secretary Kerry was the Democratic Party’s nominee for President of the United States in 2004.