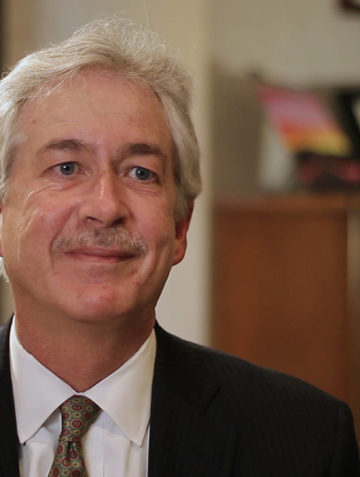 Quote: “We need to be better advocates, I think, for what we do overseas in support of American business. And I think that will come with time because nothing speaks to the value of that kind of role more than tangible success stories.”

William Burns is president of the Carnegie Endowment for International Peace. Ambassador Burns retired from the U.S. Foreign Service in 2014 after a thirty-three-year diplomatic career. Secretary of State John Kerry lauded his “quiet, head-down, get-it-done diplomacy”, stating that it had earned him the trust of both Republican and Democratic administrations. Burns served as Deputy Secretary of State from 2011 until 2014. Prior to his tenure as deputy secretary, Ambassador Burns served from 2008 to 2011 as under secretary for political affairs. He was ambassador to Russia from 2005 to 2008, assistant secretary of state for Near Eastern affairs from 2001 to 2005, and ambassador to Jordan from 1998 to 2001.

His other posts in the Foreign Service include: executive secretary of the State Department and special assistant to former secretaries of state Warren Christopher and Madeleine Albright; minister-counselor for political affairs at the U.S. embassy in Moscow; acting director and principal deputy director of the State Department’s policy planning staff; and special assistant to the president and senior director for Near East and South Asian affairs at the National Security Council.

Ambassador Burns speaks Russian, Arabic, and French, and he has been the recipient of three Presidential Distinguished Service Awards and a number of Department of State awards, including three Secretary’s Distinguished Service Awards, two Distinguished Honor Awards, the 2006 Charles E. Cobb, Jr. Ambassadorial Award for Initiative and Success in Trade Development, the 2005 Robert C. Frasure Memorial Award for Conflict Resolution and Peacemaking, and the James Clement Dunn Award for exemplary performance at the mid-career level. He has also received the highest civilian honors from the Department of Defense and the U.S. intelligence community. In 2013, Foreign Policy named him ‘Diplomat of the Year’.