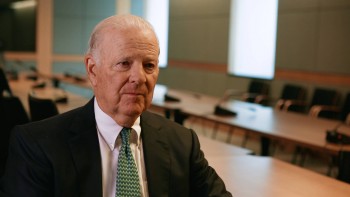 James Addison Baker, III, has served in senior government positions under three United States presidents. He served as the nation’s 61st Secretary of State from January 1989 through August 1992 under President George H.W. Bush. During his tenure at the State Department, Baker traveled to 90 foreign countries as the United States confronted the unprecedented challenges and opportunities of the post–Cold War era. Baker’s reflections on those years of revolution, war and peace—“The Politics of Diplomacy”—was published in 1995.

James Baker served as the 67th secretary of the treasury from 1985 to 1988 under President Ronald Reagan. As treasury secretary, he was also chairman of the President’s Economic Policy Council. From 1981 to 1985, he served as White House chief of staff to President Reagan. Baker’s record of public service began in 1975 as under secretary of commerce to President Gerald Ford. It concluded with his service as White House chief of staff and senior counselor to President Bush from August 1992 to January 1993. Long active in American presidential politics, Baker led presidential campaigns for Presidents Ford, Reagan and Bush over the course of five consecutive presidential elections from 1976 to 1992.

James Baker is presently a senior partner in the law firm of Baker Botts. He is the honorary chairman of the James A. Baker III Institute for Public Policy at Rice University and serves on the board of the Howard Hughes Medical Institute. From 1997 to 2004, Baker served as the personal envoy of United Nations Secretary-General Kofi Annan to seek a political solution to the conflict over Western Sahara. In 2003, Baker was appointed special presidential envoy for President George W. Bush on the issue of Iraqi debt. In 2005, he was co-chair, with former President Jimmy Carter, of the Federal Commission on Election Reform. Since March 2006, Baker and former U.S. Congressman Lee H. Hamilton have served as the co-chairs of the Iraq Study Group, a bipartisan blue-ribbon panel examining a forward-looking approach to Iraq.