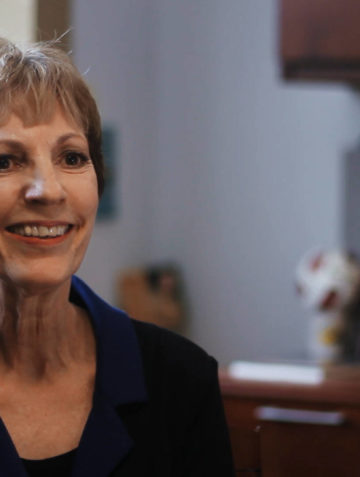 Quote: “Americans were given the option to leave. We chose to stay and together we accomplished what I look back now as extraordinary.”

Ambassador Bushnell joined the Foreign Service in 1981, with her first assignment being in Bombay, India. She then served as Deputy Chief of Mission under Ambassador George Moose at the U.S. Embassy in Dakar, Senegal. In 1993, Ambassador Moose was appointed Assistant Secretary of State for African Affairs by President Bill Clinton. Bushnell accompanied Moose to serve as Deputy Assistant Secretary. Her time in Washington was marked by extreme tension in Africa.

On April 6, 1994, Rwandan President Juvénal Habyarimana and Cyprien Ntaryamira, the President of Burundi, were both killed when their plane was shot down while approaching the Kigali Airport in Rwanda. Ambassador Bushnell, who had been visiting the area just weeks before, released a memorandum immediately following the assassinations. In it, she predicted widespread violence and the military take-over of the Rwandan government and urged the U.S. government to take action to maintain order. The U.S. chose not to heed Bushnell’s recommendations, and on the next day, April 7, the Rwandan Genocide began. Bushnell began calling Rwandan military officials in an attempt to persuade them to cease the slaughter. But without a military commitment, however, her pleas for a stop to the violence fell on deaf ears.

Ambassador Bushnell remained Deputy Assistant Secretary until being nominated by President Clinton to serve as U.S. Ambassador to Kenya in 1996. Upon confirmation by the United States Senate, Bushnell took up residence in Nairobi. Bushnell was alarmed at the vulnerability of the U.S. embassy compound to attacks. For over a year, she complained about security conditions to her superiors in Washington. In spite of Bushnell’s request for a new building, a State Department evaluation team concluded that a renovation would suffice. Bushnell’s fears proved to be well founded when on August 7, 1998 a car bomb was detonated next to the embassy by al-Qaeda agents. Ultimately, 12 embassy staff were killed along with 212 Kenyans and 4,000 people were injured.

Bushnell was nominated by President Clinton in 1999 to serve as U.S. Ambassador to Guatemala. She was sworn into that position on August 5, 1999 by U.S. Secretary of State Madeleine Albright. Of her position as Ambassador, she said:

“I think that my getting out in the countryside, letting people see me, puts a human face on the mystique of the United States of America. Every now and then you touch somebody, and somebody touches you. It is extraordinary to overcome race, culture, language, sometimes gender, economic issues, and simply connect as human beings. What is extraordinary about being an ambassador is that you have the power of the United States Government to make a difference.”

Bushnell resigned as U.S. Ambassador to Guatemala in July 2002 to become Dean of the Leadership and Management School at the Foreign Service Institute, a position she no longer holds.