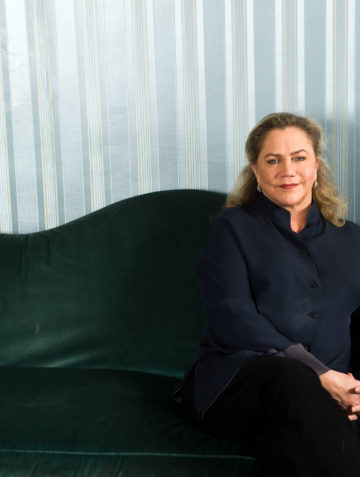 Kathleen Turner is an American film and stage actress and director. She is the daughter of Allen Richard Turner, a U.S. Foreign Service officer. She graduated from American School in London in 1972. After the death of her father, the Turner family moved back to the United States.

Turner came to fame during the 1980s, making her film debut in Body Heat (1981). Her role as the relentless Matty Waker brought her astronomical success. She continued to flourish with performances in The Man with Two Brains (1983), Romancing the Stone (1984), Prizzi’s Honor (1985), the latter two earning her a Golden Globe Award for Best Actress.

Quote: “I could go jump on a train and get over to Amsterdam or, you know, wherever. We went to Russia once […], and I can remember thinking that all I had to do was get to a phone and get hold of an American embassy. […]. That was an extraordinary sense of security and safety.”