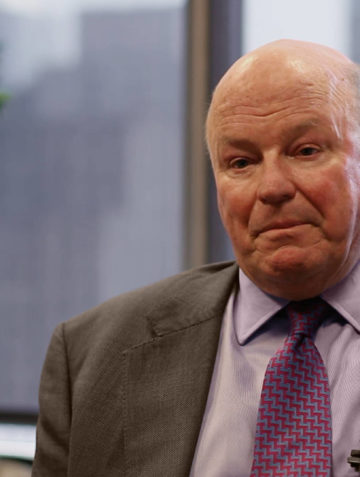 Quote: “Does anything replace two people sitting together, engaged in a dialogue, looking at each other […]. Can you do that electronically?  I don’t think you can.  You can exchange information, you can make a deal that has been carefully prepared, but when you come down to the sensitive matter, relations between nations, face-to-face contact by skilled professionals is absolutely essential if you’re going to get the right outcome.”

Frank Wisner diplomatic career spans four decades and eight American presidents. In 1961, Ambassador Wisner  joined the State Department as a Foreign Service officer. His first post was in Algeria. He then went to Vietnam, where he spent four years at the apex of the war. Frank worked as a senior diplomat in Tunisia and Bangladesh before returning to Washington as Director of Plans and Management in the Bureau of Public Affairs.

Later, as Director of the Office of Southern African Affairs, Ambassador Wisner worked closely with Secretary of State Henry Kissinger to launch negotiations with Zimbabwe and Namibia. Wisner served as the United States Ambassador to Zambia (1979–82); Egypt (1986–91), the Philippines (1991–92), and India, 1994–97.

Secretary of State Condoleezza Rice appointed Frank as the nation’s special representative to the Kosovo Status Talks in 2005 where he played a crucial role in negotiating Kosovo’s independence.