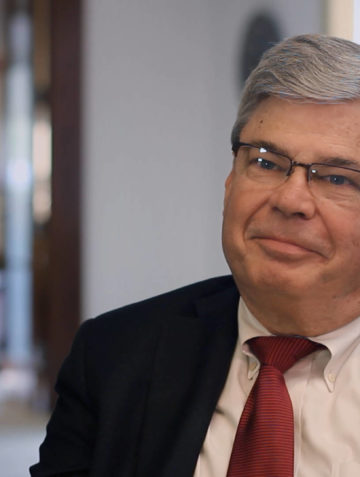 Former Commercial Minister to the EU

Quote: “It was a very rewarding experience and I think reveals that when you say commercial diplomacy or advancing U.S. commercial interests, if you do it right and are working carefully together with your counterparts in other countries which is what diplomacy is all about whether it’s commercial or otherwise, you can really avoid many conflicts that arise because of the lack of trust, the last of access, and the lack of respect for each other.”

Until April 2013, Charles Ford served as Acting Assistant Secretary of the United States and Foreign Commercial Service. As the chief operating officer of the U.S. government’s premier export promotion agency, he managed a $270 million budget and 1,400 U.S. and international employees located in the United States and over 70 countries.

Previously, he served as Advisor on Public Private Partnerships to the Commander of U.S. Southern Command from 2008-2009 and Ambassador to Honduras from 2005-2008. At the Commerce Department, he served as the Deputy Assistant Secretary for International Operations and as Director of Latin American Trade Policy in the International Trade Administration from 1990- 1994. Charles Ford also served as Commercial Minister at the U.S. Mission to the European Union in Brussels, Belgium.

Before joining the Foreign Service, Ambassador Ford worked at the Inter-American Development bank and the Motor Vehicle Manufacturers Association.