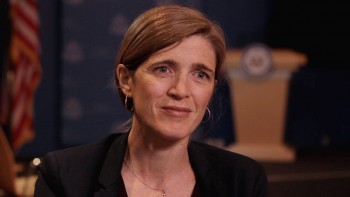 Ambassador to the United Nations

Quote: “We have the power of our ideals […] the ability to make others want what you want. There’s tremendous power in our example […]. So projecting what goes on inside this country outside is a part of our public diplomacy.”

Prior to serving as U.S. Permanent Representative to the United Nations, Ambassador Power served as Special Assistant to the President and Senior Director for Multilateral Affairs and Human Rights on the National Security Staff at the White House.  In this role she focused on issues including UN reform; LGBT and women’s rights; the promotion of religious freedom and the protection of religious minorities; human trafficking; and democracy and human rights.

Before joining the U.S. government, Ambassador Power was the Anna Lindh Professor of the Practice of Global Leadership and Public Policy at Harvard University’s John F. Kennedy School of Government, teaching courses on U.S. foreign policy, human rights, and UN reform.  She was also the founding executive director of the Carr Center for Human Rights Policy.

Ambassador Power is the Pulitzer Prize-winning author of “A Problem from Hell”: America and the Age of Genocide (2002) and Chasing the Flame: Sergio Vieira de Mello and the Fight to Save the World (2008), the basis for the award-winning HBO documentary, “Sergio.”  She is also the recent co-editor of The Unquiet American: Richard Holbrooke in the World (2011).  Ambassador Power began her career as a journalist, reporting from places such as Bosnia, East Timor, Kosovo, Rwanda, Sudan, and Zimbabwe, and contributed regularly to The Atlantic Monthly, The New Republic, the New York Review of Books, and The New Yorker Magazine.