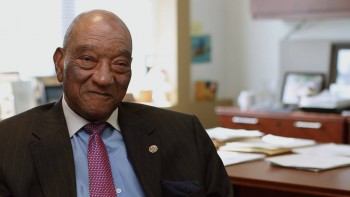 Quote: “The situation there is an anathema to us. […] I think the South Africans need to know that the United States does not agree with this system, and that if they want relations with us, they’re going to have to change. So it’s going to be my job to tell them that.”

Edward Perkins served as the Clinton Administration’s representative to the Commonwealth of Australia from November 24, 1993 until his retirement in August 1996. In 1981, he was named Deputy Chief of Mission to the American Embassy in Monrovia, Liberia; he served as Director of the Department of State’s Office of West African Affairs from 1983-85.

In 1986 he was appointed as Ambassador to the Republic of South Africa where he served until 1989. Perkins reported for duty in South Africa in 1987. On Thanksgiving Day, he met President Botha for the first time. A large crowd of black South Africans came to watch in disbelief as a black arrived at the president’s office to present his American diplomatic credentials. Ambassador Perkins was instructed to step up to Botha, who always tried to physically position himself above the incoming ambassadors. “The president’s aides didn’t know how tall I am,” Perkins said. “We ended up looking up straight at each other—right into each other’s eyes. I could tell that he didn’t intend to avert his eyes, and I didn’t intend mine either.” Perkins told Botha that he planned to travel across South Africa to meet with as many people as possible. He recalls the conversation that followed. “Then [Botha] stopped me and he stuck his finger in my face and he said, ‘Listen. I’ve heard about you. I don’t want you getting involved in our affairs. You understand?’ And then I said ‘Well, Mr. President. I’m here as a representative of the American people to the people of South Africa.” Ambassador Perkins kept his promise and did visit South Africa’s poor black townships.

In 1992, he was appointed as U.S. Ambassador to the United Nations, and U.S. Representative in the UN Security Council, where he served from 1992-1993, until taking up his last post in Australia.